At last! Usagi Yojimbo makes an appearance in the OzComics.com sequential challenges. This was a quick drawing I did last night using the Brush pen and fine liner, as well as a little white paint pen, which turned out to be really useful. Not only did it white out the blacks, but I could then reapply the blacks over it and you couldn’t tell the difference. It literally behaves like liquid paper. The pose for this image is a homage to the great Toshiro Mifune and his ronin character that he played in Kirosawa’s Yojimbo and Sanjuro. Great films. Check them out! 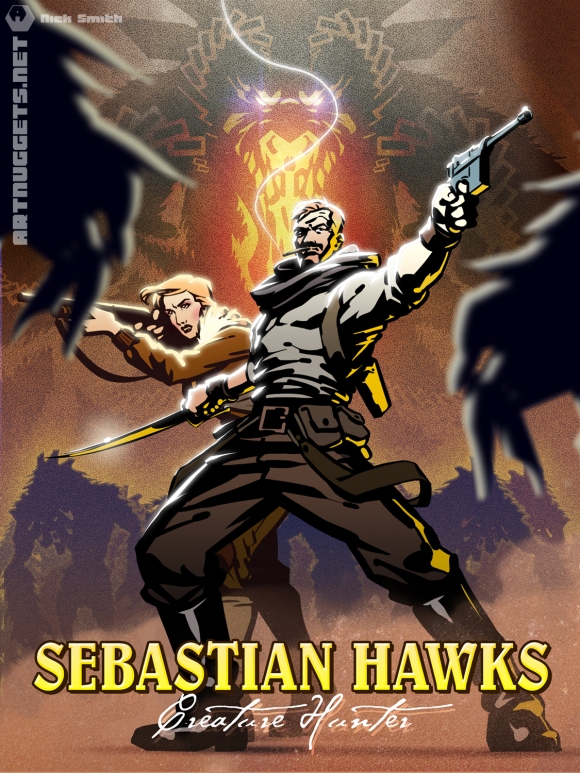 This piece was done for another OzComics.com weekly challenge. There’s a bit more to it this time because one of the more popular images will be included in the Graphic Novel that is being made with the help of Pozible. It’s called Sebastian Hawks – Creature Hunter and if you want to know more or contribute you can find it here.

Once again I’ve used this as an exercise in refining my comic style. I’m definitely getting a good feel as to what works and what doesn’t, however something like this level of embellishment would be more suited to the cover than the panels. If you’re interested in seeing this image included in Graphic Novel, please head on over to the OzComics.com gallery and ‘like’ it. 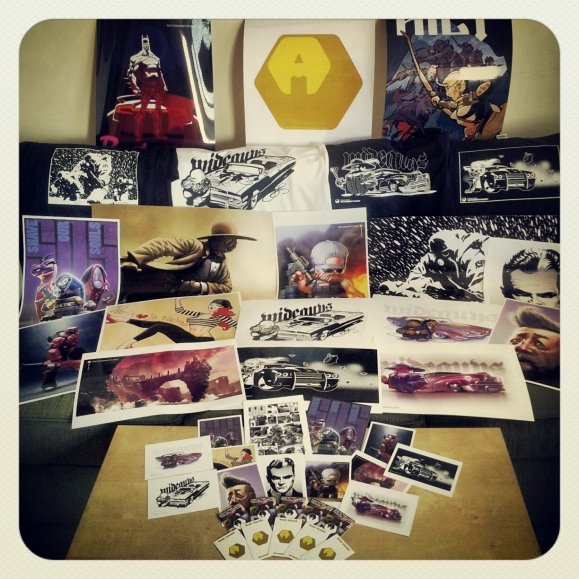 This weekend I will be in attendance at Supanova at the Brisbane RNA Showgrounds, so come on down if you’re in the area and pick up some of this sweet loot. I have postcards, prints, posters and t-shirts for sale, as well as the chance to win some of the more exclusive images.

I can be found, along with my cohort Pete Yong, at Pete & Nick’s Art Nuggets in Artist’s Alley, Booth L2. Below I have provided a helpful map, so as to remove all possible impediments to people attending. I’m excited to be taking part and hope to see many friendly faces as well as make new acquaintances. Should be fun.

A down on her luck warrior is out hunting when she crosses paths with a party of knights returning from battle. When the warrior decides on flight instead of fight the chase is on.
This is the premise for short comic that I am in the process of making. Having tried my hand with some of the OzComics.com Sequential Challenges I thought it time to put all I’ve learnt into a story of my own. It will be about 20 to 22 pages in length and will hopefully provide me a with a earning curve that will help me develop as a comic artist. I have started a blog to act as a development diary for the project where all the artwork and musings are collected in one place.
As to the artwork itself, I spent quite a bit of time getting the composition right. I had initially intended for a more straight on composition with the warrior at the bottom of the piece looking back at the avalanche of knights chasing her, but decided against this because you wouldn’t be able to see her face. As such I went for this more kinetic image. Having settled on a composition the next step was to do the pencils. I spent a lot of time on this step with the intention of skipping the inking stage and using the pencil scan as the inks. Unfortunately the scan I got was not suitable straight up for the final art and so a fair bit of tidying up was required. Once the ‘inks’ were done it was on to the colour and background. This part of the process is great fun as the image comes together. The final act was to increase the size of the warrior herself. This really helped make the image more immersive by exaggerating the depth. Finally, the arrow was added and puts the icing on the action.
This weekend I will be at the Brisbane Supanova at the RNA Showgrounds with posters promoting the comic. I will be at the Pete & Nick’s Art Nuggets booth (Booth L2) in Artist’s Alley. I hope to see you there!
Tagged Cartoon Characters, Character Design, Comic Art, Comic Cover, Comics, Concept Art, development diary, Hilt, Hilt Comic, Illustration, Knights, Warrior
Leave a comment
Comics, Fan Art Gallery 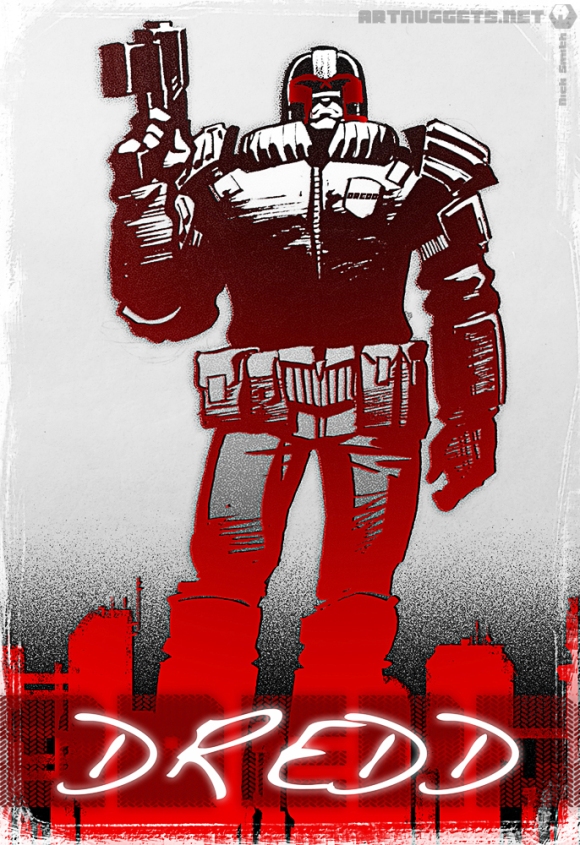 Saw me some Dredd 3D last night. Gotta say I really enjoyed it. I was pleasantly surprised how close they kept to the comic in terms of not only the character and world, but also the bleak ethos.

Personally I liked the Judge Dredd design. The helmet was true to the icon comic version, while the rest of the costume brought the character a certain believability. It was a great proof of concept. I just hope they can get enough at the box office to do a sequel. A TV show wouldn’t go amiss actually.

If I was to have one criticism it is that Karl Urban was a little on the short side for my liking. I always think of Dredd as being tall and lean. With a more pronounced jaw also. Still, it was definitely good enough to inspire me to knock out this pic.